Crafting has been rampant in these parts as of late, even if the same cannot be said of blogging. I started a two-month bobbin lace course at the end of January, and have spent many hours making tiny samples, learning stitches, and occasionally sprouting side projects to try out my budding skills.

I have spent an equal number of hours drooling over lace bobbins. They’re the perfect combination and/or perfect storm of small, collectible, relatively affordable (unless you go in for gemstone inlay and elaborate turning), beautifully crafted, useful objects. You can find all sorts of bobbins designed for different aesthetic and functional purposes, and the history of the various types is very interseting. And if you actually make lace, you can justify having a large collection. My biggest project to date called for 19 pairs, but some laces call for hundreds.

My significant other and I spent a weekend in Ottawa recently, and naturally, my lace homework had to come with us on the train. Some people bring laptops; others bring lace pillows. However, I discovered that it’s actually rather difficult to make lace with the correct tension while moving. My teacher was not tremendously impressed with the results.

On a completely unrelated note, this was the view from our hotel room: the Canadian Parliament. Amazing! 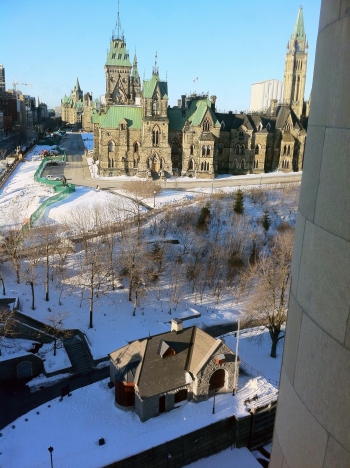 Right now, I’m working on some trim, just for fun. It’s up to about twenty inches: we’ll see how long I can go. The Canadian Lacemaker Gazette runs a “five-meter club”, but I didn’t wind anything close to five meters on those bobbins. The weaver’s knot (a brilliant invention) may come to my rescue once again.

Knitting is also making its semi-annual resurgence. In addition to trudging along on the several thousand projects I started last summer, I picked up a few new techniques (Continental!) and am working my way through the new Free-Sole Sock DVD. So far, excellent; I made a mini-sock and learned to knit backwards. I’ll be spending next month recovering from surgery, and hope to have enough mental capacity available to finish at least a few of the four socks, three mittens, two sweaters, and one shawl that I keep meaning to wrap up. There are also a couple of crochet projects yammering at me to finish them. Plus various modifications to existing items, such as a perfectly respectable hat that the recipient shunned as “not warm enough”. At least that can wait until next year. Hmph.

I imagine that weaving will have to take a short hiatus. I’ll be staying with family for a while after the surgery, and though it might be feasible to pack a simple loom or two, I probably wouldn’t use them (I will, after all, be convalescing). Spinning will be subject to similar constraints, though I might pop a spindle in the suitcase. You know, for emergencies.

Also squared away in advance of my departure: two giant bags containing four stinky fleeces. Since my S.O.’s threats of disposal were increasing in proportion to the sheepy smell, I spent the better part of a weekend scouring wool in the bathtub. (And then bleaching the bathtub so as to render it fit for human use.) These fleeces were free, which as fiber-prep folks will know, is a mixed blessing. In the end, I kept the two best fleeces and disposed of the other two, which were heavily matted and very dirty. The ones I kept are of an unidentified longwool: Lincoln or something close to it, but I didn’t have the chance to ask the shepherd since the fleeces were a surprise present (thank you!). Anyway, I now have one white fleece and one black-brown fleece. No plans for them yet, but maybe I’ll make a two-toned fleece rug this summer, à la Anne Field.

Now, there is fringe to be twisted and hems to be stitched. Or I could act like an adult and start my taxes. Thoughts? 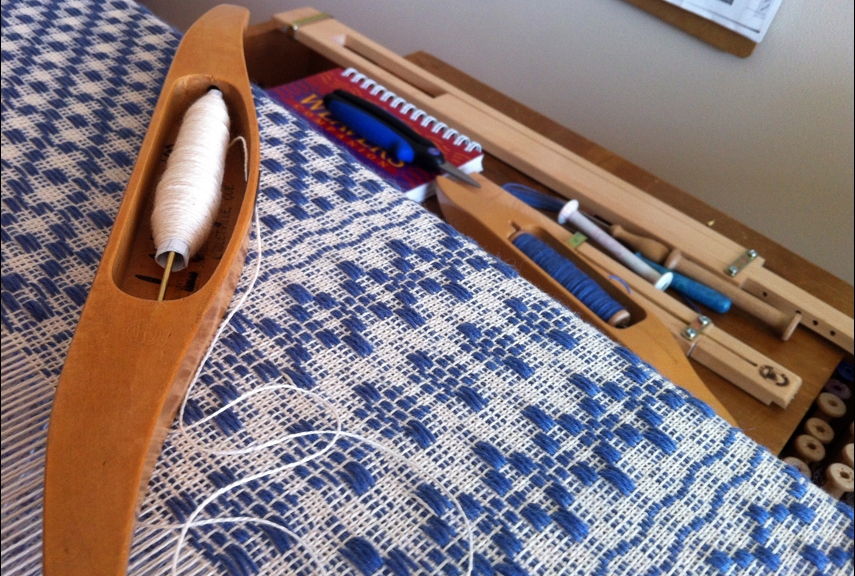 PSA: Get your flu shot. In addition to its role as a major public health threat, the flu interferes dreadfully with one’s crafting goals. I’m just now getting around to rounding up photos of the Christmas gifts I made for people this year, of which the largest undertaking was the Giant Secret Weaving Project. As not all of the intended recipients have yet received their finished objects, I will have to remain mysterious about the intended purpose of the warp… but not so mysterious that I can’t give you a sneak preview. 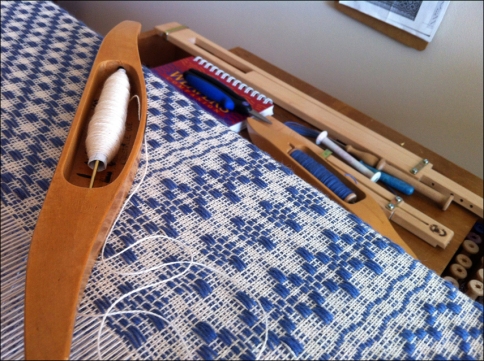 – A woven Kindle case. The fabric for this was woven on my little two-shaft Brio loom, if you recall, and I’m pleased with how well the cloth turned out. I did have to add interfacing– a dense sett being difficult to achieve through the loom’s wooden reed– but it’s a sturdy little case, despite my shoddy job of hand-stitching the seams. 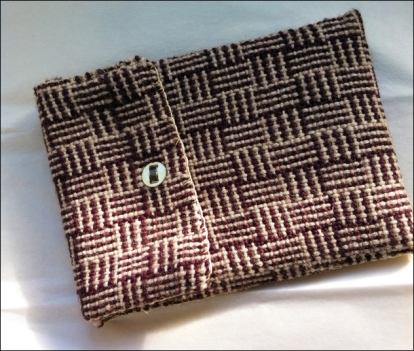 – A pair of scarves for my parents’ dogs. These still need to be modeled by the beasts, but since it’s taken me so long to assemble this post, I decided not to hold it up any longer. You can wait for cute puppy pictures, right? 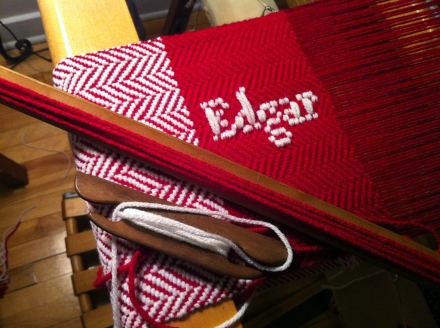 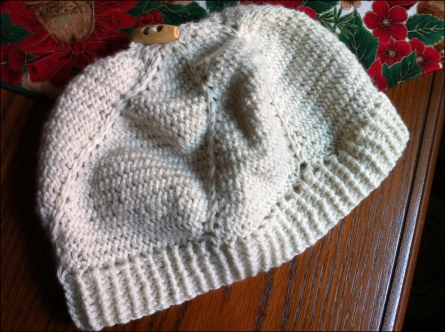 – Tea towels. Another on-loom picture, since I wove these at my guild, so I need to wait for them to be cut off. The weft is naturally dyed cotton, since I only had undyed yarn, and my turn to weave came up unexpectedly, and there was no time to mordant, so… out came the cutch!

On the other side of the gifting coin, I now have my very own sewing machine! (Thanks, Mom!)

I whipped up a wool skirt to wear to work, upon which I managed to spill mustard sauce on its second wearing. Dilemma: take the whole thing for dry cleaning, or replace the unfortunate panel with leftover fabric?

After such frustrations, and despite a long to-do list involving less portable crafts, tatting seemed like a good thing to spend the rest of my winter vacation on.

And then, the tatting triggered some memories of things seen at fiber festivals… and I felt that itch… you know the one. The one that signals a new craft on the horizon. 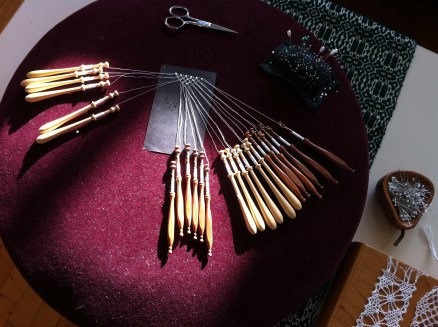