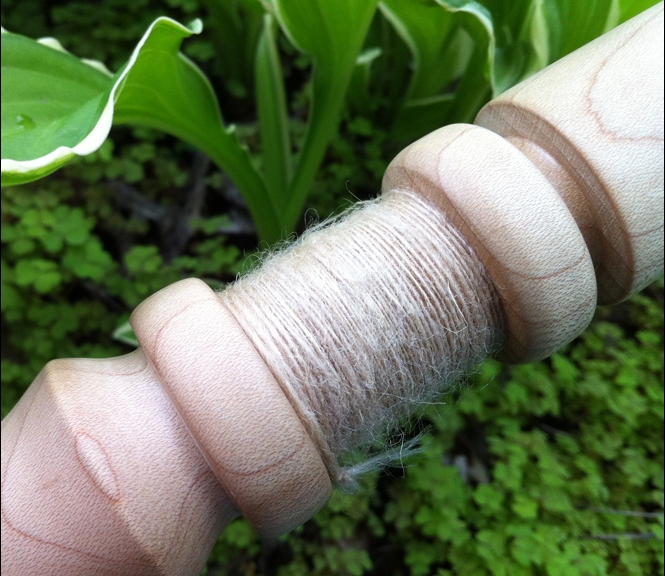 One of the problems I’m having in the studio is pacing myself. I want to try everything, all at once, while simultaneously mastering every detail. (I think there’s a contradiction inherent to this sentiment.)

Lately, I’ve been drawn to the allure of fiber preparation. Not having any raw fiber handy, I consoled myself with combing together an ounce apiece of baby camel down and tussah silk. I took to my trusty Ashford spindle with the resulting globs of fluff. I think this will turn into a weft yarn for a warp of some leftover Tencel that I have lying around.

I used a dog slicker for the actual blending. Here’s a comparison of the fibers before spinning:

I’ve also been trying to learn different methods of drafting on the spinning wheel. Strangely enough, I’ve got my antique wheel to a point of relative stability, and it’s spinning well. I’m still planning to take the flyer in for a permanent repair as soon as possible, but with a little bit of shimming here and there, things are moving just fine.

I’m comfortable with a couple of different drafting techniques on a spindle, but the options for wheel spinning are numerous and new to me. I’m working my way through the techniques in the DVD A Spinner’s Toolbox, and discovered that what I’ve been doing naturally is actually a variant of woolen spinning. (When I heard Judith MacKenzie say that everyone is either a worsted spinner or a woolen spinner, it was as the footsteps of doom. Worsted spinning seems the logical choice for most of the projects I want to make. But this long-draw thing is… weirdly compelling.)

In fact, spinning with a short forward draw at all presents me with some ergonomic challenges. Why? Well, on my wheel, the mother-of-all on my wheel sits to the left, and I treadle with the right foot. But my hands are used to spindle spinning, where I hold the fiber in my left hand and draft with the right.

The technique I’ve slipped into could be classed as an attenuated long draw. It’s not ideal for what I want to do (spin warp yarn), but it should work.

I’ll still probably have to figure out how to draft left-handed– not a bad idea in any case– but I think it will take some time to get my hands coordinated.

This is the resulting yarn, before washing:

I did whip up a woven sample with some of the wheel-spun yarn. This was a one-morning warping job: 60 ends go fast. I took the opportunity to work on my plain weave, which is a surprisingly challenging thing. Any unevenness in the beat or selvedges sticks out like a sore thumb.

Since the warp was short, and I was weaving at ten picks per inch, I had the sample off the loom and into the bathtub in no time.

I can’t actually wear much wool (due to a strong inclination to sneeze), so this will remain in the Basket of Interesting Experiments, but I do have an official Finished Project to share. I’ve been knitting this hat on the sly as a gift:

Now, it’s time to get ready for the Tour de Fleece. More to come!

Last Saturday, I welcomed home a new member of the family.

Can you guess what it is?

Here’s a clue. A small piece of wool, probably quite old, stuck to the wood under the mark “FRS. BORDUA, ST CHARLES, R.C”.

If you’re still stuck, how about this? 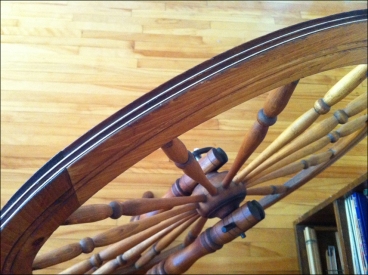 Last week I was listening to a podcast that mentioned Canadian tilt-tension production wheels. I’m lucky enough to live in the general area where these wheels were manufactured, so on a whim, I stopped by ye olde Craigslist. The next thing I knew….

It’s a perfect fit for my needs, not to mention my tastes. I’ve been saving up for a Saxony-style wheel with a single treadle, and I knew that I wanted to make primarily fine yarns for weaving, and I like antiques, and this puppy fits the bill on all counts. It’s a François Bordua wheel from St. Charles, which according to this site dates it to somewhere between 1843 and 1903.

So it is an antique, and there are a few issues. The flyer was repaired sometime in the distant past, and it’s still a little wibbly. I’m telling myself that this has nothing to do with the fact that I DROPPED IT the first time I sat down to spin. (Yes, really. I almost cried.*) The arms of the flyer are wired together with what looks to be fairly heavy-gauge steel, so it’s not going to fall apart, it’s just… wibbly. Naturally, I’m a little concerned about doing further damage, so before I settle in to any serious spinning I’d like to research repairs, replacements, and what I should and shouldn’t do.

That isn’t to say I didn’t try it out.

And it was delightful! (For what my opinion is worth, anyway, since I’d never tried wheel spinning before.) It was also very fast. I love this thing.

As with most wheels of this kind, there’s only one bobbin, but that’s fine. No different than spindle spinning. Fortunately, my loom came with a swift and a ball winder, so I am well equipped. 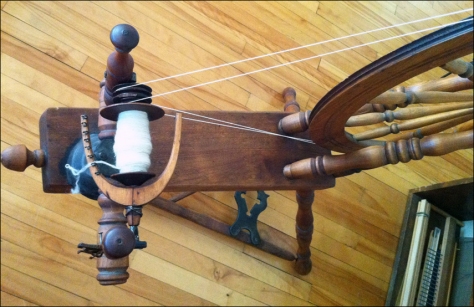 Have any of you ever worked with an antique wheel? The owners of this one for the last twenty years used it as a decoration, so I don’t know how long it’s been since it was used. I think it’s time to put it back to work. Carefully!

*Actually, what happened was that the front leather bearing was too loose, so the flyer slipped out and skidded across the floor once the wheel started spinning. I think the skidding motion is what saved it: if it had dropped straight onto the floor, I suspect that it would have broken into pieces and that I would have been a sad blogger. Hopefully we will never find out.