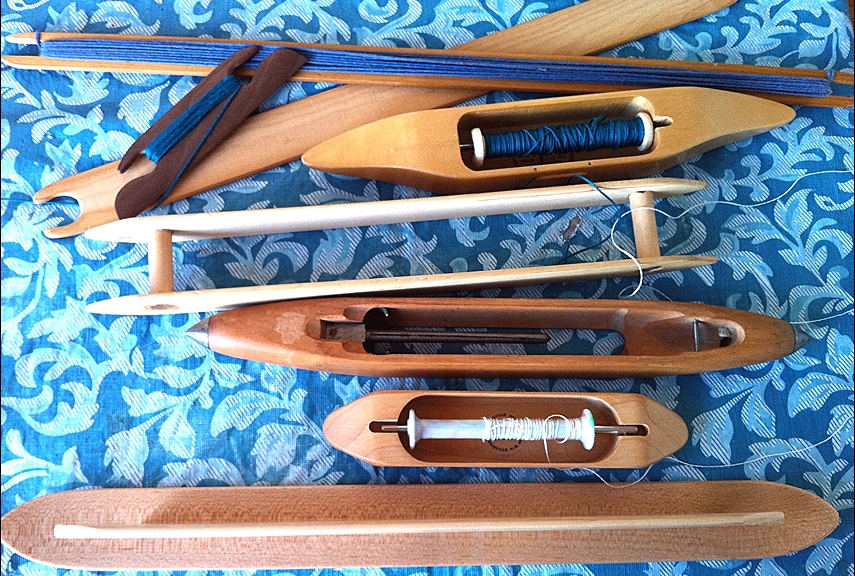 A good shuttle, while not absolutely required to make cloth, is one of the most important tools for efficient weaving.

The operating principle is the same for the simplest stick shuttles and the heaviest industrial flying shuttles: the shuttle carries weft (or woof, or filling) thread back and forth through an arrangement of warp threads.

When you consider the back-and-forth motion of a shuttle on a conventional loom, it’s easy to see how the word came to be applied to any sort of relayed transportation device.

From Old English scytel (“dart, arrow”), from Proto-Germanic *skutilaz (compare Old Norse skutill (“harpoon”)), from *skut- (“project”) (see shoot). Name for loom weaving instrument, recorded from 1338, is from a sense of being “shot” across the threads. The back-and-forth imagery inspired the extension to “passenger trains” in 1895, aircraft in 1942, and spacecraft in 1969, as well as older terms such as shuttlecock. (Source: Wiktionary)

So the next time you hop on a shuttle bus, wherever you’re going, you can really think of yourself as part of the… fabric… of modern society.

There’s not much craft progress to report today, but I have some more linguistic trivia for you.

As you almost certainly know, for most of the industrialized world, handspinning and weaving are specialty crafts and hobbies more than a central part of daily life. But textile production has been a driving force behind human innovation and industrialization for millennia, and that left a mark on our language. Common words like “textile”, “cloth”, and “fabric” come from old, old roots, and have relatives that may surprise you.

For instance, the word “textile” has cousins that we use all the time whether or not we work (or play) with fabric. It can be traced directly to the Latin word texere “to weave”, which in turn comes from the Proto-Indo-European root *teks–. This root was inherited by the Indo-European languages, where it took on various forms and meanings. Among its older and more obscure descendants, we have Old High German dahs “badger” and Sanskrit taksan “carpenter”. Others that might be more familiar include modern English “text”, “technical”, and “architect”. For my French-speaking readers, this is also the origin of tisser “to weave”.

(In case you’re still curious, the word “cloth” came to English through the Germanic branch from another Indo-European root, *gleit-, which had a meaning along the lines of “to cling to”. Like “textile”, “fabric” came through Latin, but from Indo-European *dʰabʰ “to fashion, to fit”.)

Okay, I got sucked into the Wiktionary web. The word under discussion is supposed to be “textile”, if you’re confused. Anyhow, a few members of its family tree jumped out at me:

I like thinking that our crafting terms are related to words with these cheerful connotations. Of course, so are the words “tissue” and “technophobe”, but let’s take what we can get.

Now, it’s back to the workbench. Spring is on its way, and I’ve got two of my favorite things on my mind: trees and miniatures. A tiny treehouse may be in the works. Where’d I put the superglue?