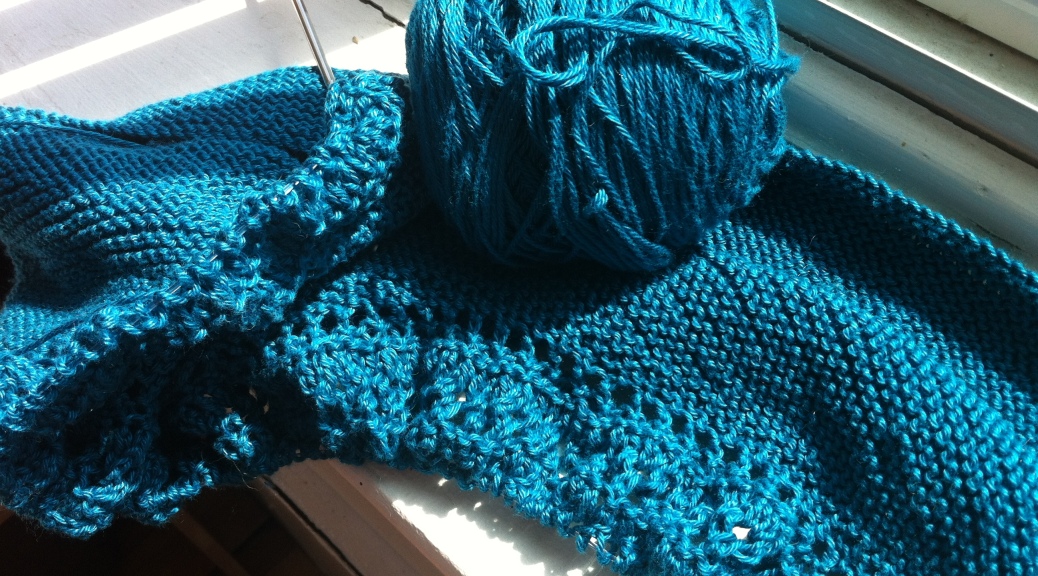 I’ve mentioned, probably too often, that I’m not much of a knitter.

I’ve been fascinated by weaving for as long as I can remember, but didn’t actually teach myself to weave until quite recently. In contrast, I learned to knit many years ago, when my mother taught me to make tiny ski hats. Her knitting didn’t exactly follow a by-the-book approach: more along the lines of “just decrease when it’s time” and “use whichever needles you can find that match”. Not that there’s anything wrong with that– learning to do things by feel gives you a better sense of underlying structure than does following a pattern to the letter, but it’s not the systematic approach that many (brilliant) modern knitters learned.

Accordingly, I’ve often felt a vague sense of inferiority in the knitting realm, not helped by my own lack of dedication. I tend to come down with knitting like a stomach bug: once or twice a year, unpleasant while it lasts, and mostly forgotten once over. When I come back a few months later and pick up the needles again, I’m invariably frustrated that my abilities haven’t magically improved in the interim. (When I mentioned my trouble with Henslowe to chopsticknitter, she was entirely sympathetic, until I showed her the absurdly simple pattern. At which point she observed that considerably less attention was being paid to the shawl on my lap than to, say, our conversation, my tea, and the weather.)

In general, I think I’m a bit disconcerted by textile techniques in which the whole project literally hangs by a single thread. Until the whole project is done, it’s a challenge to relax for fear of making a mistake. (For similar reasons, I’m a much better baker than I am a cook.) With my woefully slow-moving needles, knitting is the most troublesome of such techniques, even though it’s easier to correct mistakes in knitting than in some other single-string techniques. If you’ve ever tried to fix a mistake in tatting once a ring is closed, you will recognize this headache:

But even if you can undo knitted fabric without having to cut it apart (usually), it’s completely unrewarding to rip it out over and over again. Which is what I inevitably wind up doing– or else I decide to live with a mistake and it haunts me forever after. (That said, chopsticknitter also encouraged me not to rip out the lace section of my Henslowe despite the, well, personal touches that found their way into the pattern. Thanks to this helpful advice, I’m nearly finished and think I’ll find it quite wearable.)

Compared to knitting, I find the learning process of weaving much more rewarding, and with every new technique I learn I find that I’m exponentially* more willing to put in the time to study and correct mistakes.

In a welcome moment of peace amidst the knitting wars, I finally got myself an inkle loom (from this shop). 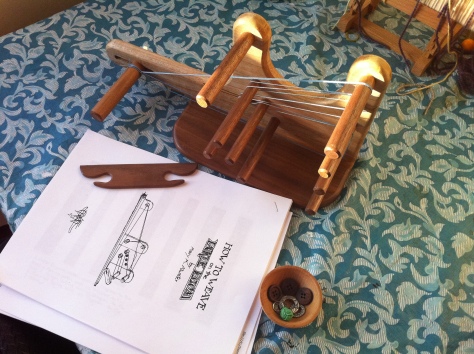 I quickly put on a test warp and am finding inkle weaving to be a pleasant and relaxing experience. I’d never tried this kind of weaving before: my plan for this loom had been to use it for tablet weaving as an alternative to a backstrap, but I’ve also become interested in the idea of pick-up patterning. Though, being freshly burned from the knitting, I thought I’d better master the basic mechanics of this little guy before starting anything fancy.

I guess simple weaving isn’t comparable to complex knitting, but even so– weaving is so much more my thing. I’ll keep struggling my way through the knitting, but I suspect I’ll be much happier if I keep a security blanket (literal or figurative) on the loom. 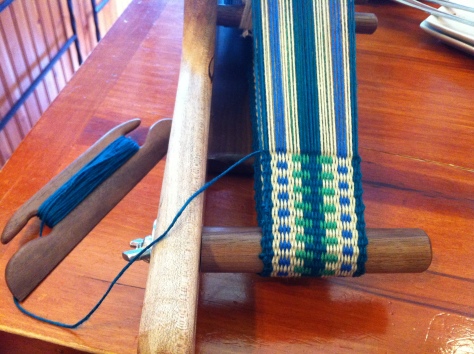 *Not hyperbole. Only a little, anyway.

2 thoughts on “Confronting my nemesis with resignation, if not aplomb”